Starting in 2013, the Winged Victory / Nike of Samothrace monument was dismantled for a comprehensive study and restoration.

The statue of the goddess Nike was relocated to a nearby gallery equipted for restoration.

During the exam, it was x-rayed, photographed extensively, examined under multiple wavelegnth lamps then partially disassembled and completely cleaned. Fragments belonging to the statue were brought out of the storage rooms and reattached. The most striking addition was of a feather to the left wing that changed the outline, giving the wing a slightly more dynamic appearance.

The left shoulder of the statue had been overdone in plaster and was carefully resculpted to match the proportions of the figure. In the process of removing some of the plaster, hitherto unknown strands of the goddess's hair were found on the nape of the neck. Once the cleaning and reassembly of the statue was finished, it was set back atop it's newly reconstructed and cleaned prow-shaped pedestal.

What I tried to show is the reworked left shoulder, the new feather on the left wing, and the new Carrara marble addition to the rear bottom of the goddess that helps to stabilize it. If you compare this model with the model of the statue as it was from the 19th century, you can see some of the changes.

In the photographs of the print, the obvious lines and gaps are visible. I printed the statue at 400mm, which was roughly twice the volue size of my printer. I used LuBan software to automatically chop the model apart into smaller printable pieces. I used a pearlescent finish white PLA to print it and chose to leave the gaps unfilled as they aren't glaringly obvious until someone looks more closely. 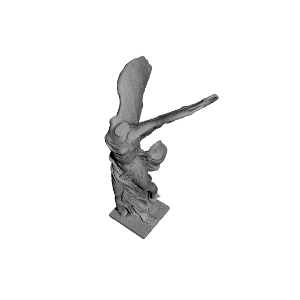