3D
2,369 views 65 downloads
Community Prints Add your picture
Be the first to share a picture of this printed object
0 comments

This is a replacement part for the Easy3DMaker printer.
The original nozzle cover is ineffective with the fan being too far from the print and only blowing from behind. It makes you need to rotate the printable part in order to make the fan blow at the most overhanging parts.

This replacement not only guides air directly to the print around the nozzle, but tries to cover as much area as it can by splitting the airflow into two separate ducts facing each other.

It is designed to directly replace the original metal cover, the original screws can be used to mount it.
Note: There is no space for a nut for the fan screw. But the fan pops in, and the screw is keeping it in tight without a nut. Not the best, but I didn't want to sacrifice more space for air.

WARNING: This goes very close to the nozzle. I had it printed out of PLA, and could print PLA with. But once I've started an ABS print, the duct started to melt.
It is strongly advised to print it out of heat-resistant PLA. (or ABS, but it is difficult)

I designed it in Blender.
It went through several iterations, maybe 10 at least, and it may not be the last, but seems effective.
I'm not an airflow-genious, it was based on trial/error.
The straight wall is obviously not the best idea, the air comes in towards me then collides with the wall, and then goes out at the bottom. Maybe directing it with a slope would be better.

Brim is recommended for the print.
It does not require high quality, my print is fine with 0.25mm layer thickness. 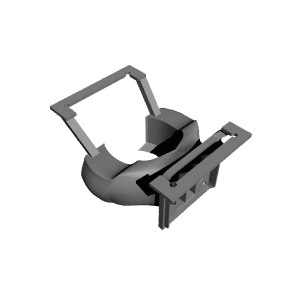