3D
Scan The World
3,561 views 176 downloads
Community Prints Add your picture
Be the first to share a picture of this printed object
0 comments

In memory of Joseph Toynbee ESQ.. F.R.S. Originated by the working men of Wimbledon and erected with funds contributed by them and by his friends and others interested in the public good.An ornate structure situated near the junction of Wimbledon Hill Road and High Street, Wimbledon. Errected in 1868 as a memorial to Joseph Toynbee. In addition to his medical work, Joseph took a keen interest in local affairs. He was one of the driving forces behind the Village Club, built on the Ridgeway in 1859. Designed to provide educational opportunities for the less fortunate, the building contained a reading room, library and lecture hall.

Renowned Victorian surgeon and philanthropist who campaigned to preserve the Wimbledon we still know today, died exactly 146 years ago tomorrow on 7 July 1866. Still recalled by Toynbee Road and the memorial drinking fountain at the top of Wimbledon Hill Road, Joseph was also father of the Toynbee dynasty of writers. He and his wife Harriet had nine children in all, including the philosopher and economist Arnold Toynbee (1852-1883) and Harry Valpy Toynbee, father of the famous historian Arnold J Toynbee (1889-1975). The writer Philip Toynbee was Arnold J Toynbee’s son and his daughter is The Guardian columnist and broadcaster Polly Toynbee. Joseph, a surgical ear specialist who cured Queen Victoria of deafness by syringing her ears, was a founder of the Wimbledon Village Club and inspired the present day Museum of Wimbledon. He lived at Beech Holme, 49 Parkside, now the site of a cancer clinic. The land had become available following the break up of the huge Wimbledon park estate formerly owned by Earl Spencer, Lord of the Manor. The inn-keeper of the Dog and Fox Inn in the High Street had bought the site south of Somerset Road but then sold it to Joseph, who had Beech Holme built especially for his family and lived there from 1854. Born just after the Battle of Waterloo, Joseph Toynbee was one of 15 children of a wealthy Lincolnshire farmer. He trained as a surgeon in London and headed the first ear and throat disease department at St Mary’s Hospital, Paddington. The Queen was among his patients.

Beech Holme, a large Italianate building, was in easy commuting distance of Paddington. He would walk down the hill to Wimbledon Station, often accompanied by some of his children. It was a very comfortable home with a large garden, stables, coach-house, and wonderful view across the Common towards the Windmill.Joseph became treasurer of a committee aiming to establish a museum for Wimbledon but the village and the newly developed town had to wait 50 years after his death before it became a reality in 1916, sharing the building with the Village Club. Joseph was also a keen conservationist who strongly opposed Earl Spencer’s plan to enclose the Common in the 1860s but he died five years before the 1871 Act of Parliament that has protected it ever since. His untimely death came when he was only 50. Tragically, he was found dead in his consulting room after accidentally inhaling prussic acid and chloroform in what is thought to have been a scientific experiment to test a remedy for tinnitus. He was buried at the nearby St Mary’s Church. The drinking fountain at the top of Wimbledon Hill Road was erected as a memorial to him in 1868. The family sold Beech Holme and moved into a smaller house farther up Somerset Road. Joseph’s son Arnold became a famous lecturer on the Industrial Revolution but died even younger than his father, aged just 30. Beech Holme’s later owners included magazine proprietor Fred Poke, publisher of The Connoisseur and Titbits. He arrived in 1939 and bought 48 Parkside too. After his death both properties fell into disrepair, squatters moved in and fire damaged part of the former Toynbee home. Developers bought both houses in the 1980s and No 48 was demolished. Despite the Toynbee connection, Beech Holme was refused English Heritage listing and earmarked for offices. A new wing was added and for a while it was occupied by the Dominion Insurance Company. In 2000 there were new plans to convert it into a cancer treatment centre and the Toynbees’ former garden disappeared in an £18 million redevelopment. The building opened as the Parkside Oncology Clinic in 2003. However, an English Heritage blue plaque now commemorates both Joseph and his son Arnold.

This model can be printed without support but the detail around the edges of the roof will be compromised. To maintain this detail additional support will need to be added. Cura will not create sufficient support so this print was supported with custom settings using Meshmixer. 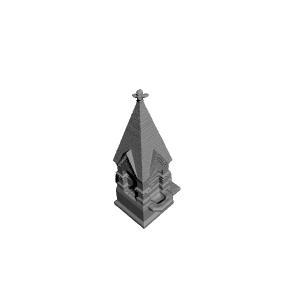 ×
0 collections where you can find Cross Monument in Wimbledon, London by Scan The World