Print big....and you have yourself a raven, ah ha!

I have included some shots of the 3D modelling in progress in zbrush, a little video below showing the process of creating the feather details.

My inspiration for creating this design was from La Fontain / Aaesops fable the Crow and the Fox, however both crows and ravens appear in folklaw and mythology across cultures - in Celtic mythology, the warrior goddess known as the Morrighan often appears in the form of the bird, or is seen accompanied by a group of them. Typically, these birds appear in groups of three, and they are seen as a sign that the Morrighan is watching – or possibly getting ready to pay someone a visit.

In some tales of the Welsh myth cycle, the Mabinogion, the raven is a harbinger of death. Witches and sorcerers were believed to have the ability to transform themselves into ravens and fly away, thus enabling them to evade capture.

Crows sometimes appear as a method of divination. For the ancient Greeks, the crow was a symbol of Apollo in his role as god of prophecy. Augury – divination using birds – was popular among both the Greeks and the Romans, and augurs interpreted messages based on not only the color of a bird, but the direction from which it flew. A crow flying in from the east or south was considered favorable.

The Native Americans often saw the raven as a trickster, much like Coyote. There are a number of tales regarding the mischief of Raven, who is sometimes seen as a symbol of transformation. In the legends of various tribes, Raven is typically associated with everything from the creation of the world to the gift of sunlight to mankind. Some tribes knew the raven as a stealer of souls.

Recommended settings - 0.20mm layer height 10% infill Support off This uses 43g of filament and takes around 4 hours 20 minutes to print. Slow down print speed if you have any problems with warping print. 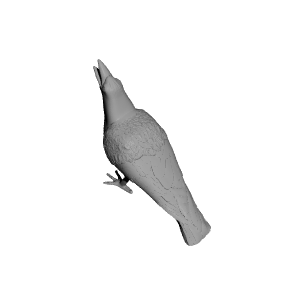 I remixed the model to insert a key on its peak, so it looks like sci-hub’s logo. With the key, the model is not support free anymore.

I had to scale it to blackbird size to print on the Ender 3 overnight, but now the cat has a bird decoy to bird watch with, and the local crow family has stopped by in the tree outside to see what's up.

Excellent model. Thanks for sharing.