Cthulhu concept design that I entirely sculpted in Zbrush.

Cthulhu is a fictional deity created by writer H. P. Lovecraft and first introduced in the short story "The Call of Cthulhu", published in the pulp magazine Weird Tales0 in 1928. Considered a Great Old One within the pantheon of Lovecraftian cosmic entities, the creature has since been featured in numerous popular culture references. Lovecraft depicts Cthulhu as a gigantic and wholly evil entity worshiped by cultists. Cthulhu's anatomy is described as part man, part dragon, and part octopus.

The upper part unfortunately didnt show the finshed piece, but hopefully the model was compeltely free support as I tryed to do.

For this model also I optimized the internal part using boolean operations: to do this I added 5 cones (two for the arms and three for the torso) that I subtracted in a second phase using dynamesh.

Zremesh, project all and decimation master worked really well on this model, allowing me to show also the skin alphas on a reallly small scale . 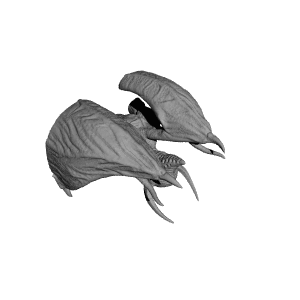 Scaled down a bit and printed with .1mm layer in PLA with no supports and 15% infill. Took 9hrs, because I wanted it to go nice and slow.

17.5 hours .2 mm layer 15 mm/s 4 top 4 bottom 0% infill PLA Was sad the top of wings horns failed and top of back tentacles had issues considering how slow i printed it.

Makerfarm Pegasus 12 Hatchbox glow in the dark green PLA The chest broke free, but everything else came out really nice.

Took a couple photos pre- and post- acetone smoothing. This print went super well and did great without supports. Thank you for sharing!

This is an amazing model, Thanks so much for making it available. The timelapse of it was enjoyable to make too http://youtu.be/PDuF2Xb_T7I