3D
12,749 views 1,106 downloads
3 collections
Community Prints Add your picture
Be the first to share a picture of this printed object
0 comments

Cthulu is the most mighty, feared & worshipped of the old ones! - File is ready for printing for a great gift or ornamental decoration.

Cthulhu is a fictional deity created by writer H. P. Lovecraft and first introduced in the short story "The Call of Cthulhu"H. P. Lovecraft's initial short story, was published in Weird Tales in 1928 and established the character as a malevolent entity hibernating within an underwater city in the South Pacific called R'lyeh. The imprisoned Cthulhu is apparently the source of constant anxiety for mankind at a subconscious level, and also the subject of worship by a number of human religions. The short story asserts the premise that, while currently trapped, Cthulhu will eventually return.

Print it as a gift or as a decoration for your shelf. 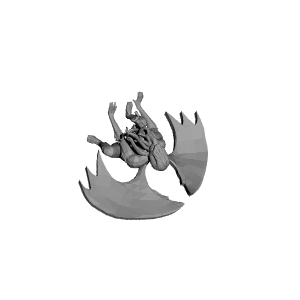 ×
3 collections where you can find Cthulu by THEWEBCANDY