Cuirassed figure with an unrelated head of Marcus Aurelius

3D
360°
Scan The World
2,072 views 173 downloads
1 collection
Community Prints Add your picture
Be the first to share a picture of this printed object
0 comments

Cuirassed figure with an unrelated head of Marcus Aurelius

This is an ancient marble sculpture consisted of two parts sculpted at the different periods of time combined together. The body is depicting an unknown cuirassed male. Cuirass is a piece of armour, formed of single or multiple pieces of metal or other rigid material which covers the torso. The head of the sculpture depicts Marcus Aurelius, called the Philosopher, was Roman emperor from 161 to 180. He ruled the Roman Empire with his adoptive brother, Lucius Verus, until Lucius' death in 169. He was the last of the rulers traditionally known as the Five Good Emperors. He is also seen as the last emperor of the Pax Romana, an age of relative peace and stability for the Empire. Marcus' personal philosophical writings, often called Meditations, are a significant source of the modern understanding of ancient Stoic philosophy. They have been praised by fellow writers, philosophers, and monarchs–as well as by poets and politicians–centuries after his death. 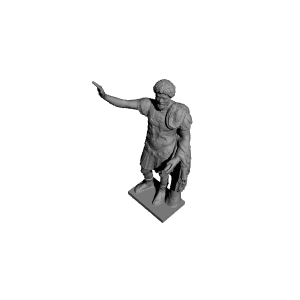