Cupid Cutting His Bow from the Club of Hercules

3D
Scan The World
3,348 views 205 downloads
3 collections
Community Prints Add your picture
Be the first to share a picture of this printed object
0 comments

Cupid Cutting His Bow from the Club of Hercules

Edme Bouchardon portrays Cupid as an adolescent playing a trick on Hercules. The god of love has an impish look on his face. The gentle contours and the spiral motion of the body invite the viewer to walk around the sculpture. This daring work, in which the sculptor sought to realistically portray a naked, unidealized adolescent, was considered shockingly crude at the time.

Cupid, portrayed here as an adolescent, has stolen the weapons of Mars and the club of Hercules. Proud of having disarmed these two formidable deities, he laughs maliciously as he tests the spring of the bow he has carved out of the club. Bouchardon showed the terra-cotta model at the 1739 Salon; a marble was commissioned by Philibert Oudry, director of the King's Buildings, in 1740, but as Bouchardon was fully occupied by the Grenelle fountain, he did not begin work on it until 1745. The sculptor made several studies from life to give his figure a natural appearance and exhibited a plaster model at the 1746 Salon. He worked on the marble from July 1747 to May 1750, carrying out the sanding and polishing himself, tasks usually carried out by assistants. However, the astronomical fee - 21,000 livres - he received for the sculpture more than compensated for this.

Bouchardon's Cupid is a daring work reconciling antiquity and the Renaissance in its naturalistic treatment of the figure. From Eros Stringing His Bow (Museo Capitolino, Rome), he borrowed the large wings and the motif of the god examining his bow. He must have also looked at a canvas by the Italian painter Parmigianino (1503-1540), then in the collection of the Duke of Orléans in the Palais Royal in Paris. Bouchardon's figure has the same grace, but its sinuous movement surpasses that of its Italian model: the adolescent's pivoting body forms a long spiral. The round base and circular arrangement of the objects on it (rope, quiver strap, lion's tail) accentuate the effect. The sculpture invites one to move around it, no doubt because it was destined to be placed in the middle of the Hercules Room at Versailles. 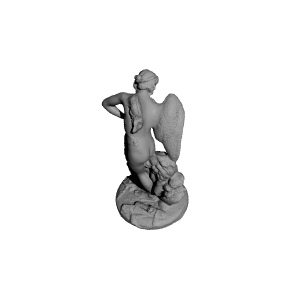