3D
Scan The World
2,940 views 208 downloads
2 collections
Community Prints Add your picture
Be the first to share a picture of this printed object
0 comments

Gibson made numerous drawings, engraved illustrations and sculptural reliefs based on Apuleius story of Cupid and Psyche. Three marble versions of this design were made, the first being for the Duke of Northumberland of 1854 (Alnwick Castle) and the present one for Mr Henry Sandbach of Hafodunos Hall, probably in the same year. A third version is in the collection of the Royal Academy of Arts in London. Gibson described the story as 'presenting so many varied pictures' and he also seems to have been 'haunted' by its theme of mortal suffering redeemed by heavenly happiness, one which he associated with his own life and platonic love for Mrs Sandbach (see No. 7505). The relief, one of Gibson's most spirited designs and clearly influenced by Thorvaldsen's 'Day' and 'Night' (Nos. 7503 and 7504 in this Gallery), represents no particular episode in Apuleius story but is rather an abstraction on the theme of love and its struggle for the human soul. 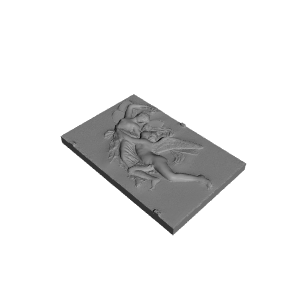