Cupid with an Arrow

3D
Scan The World
4,178 views 481 downloads
4 collections
Community Prints Add your picture
Be the first to share a picture of this printed object
0 comments

Cupid with an Arrow

The statue "Cupid with an Arrow" by M.I.Kozlovsky is a typical example of sculpture in the style of classicism, in its choice of subject, composition and methods of treating marble. This statue, executed in the "classical style" deliberately evokes associations with works of ancient masters down to the stylized tree trunk by Cupid’s leg. This was a device used by Roman sculptors as a support for copying in marble, the Greek bronze originals. Later that motif became a token sign of Roman plastic art and of classicism imitating it. The flowing outline, the harmony of the commensurate sculptured masses, the peculiar variant in the classical chiasmus, liken Kozlovsky’s statue to the masterpieces of ancient sculptors. The exquisite finish of the marble, its smooth texture, without nuances, are characteristic of a work completed in the period of classicism to a high professional level. Such sculptures were fashionable in the late 18th century, they appealed to the public and were often ordered for decorating palaces and parks 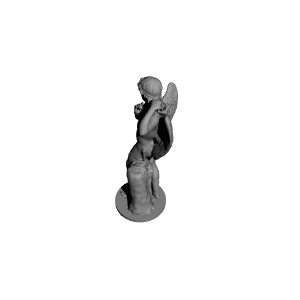