3D
Scan The World
2,067 views 110 downloads
Community Prints Add your picture
Be the first to share a picture of this printed object
0 comments

This relief is part of the Curiazi Burial. The Horatii and the Curiatii is an opera by the Italian composer Saverio Mercadante. It takes the form of a tragedia lirica in three acts. The libretto, by Salvadore Cammarano is based on the Roman legend of the fight between the Horatii and the Curiatii. It was first performed at the Teatro San Carlo, Naples on 10 November 1846. This relief slightly resembles the scene of the ancient Roman legend of the kingdom era. The Horatii were triplet warriors who lived during the reign of Tullus Hostilius. The accounts of their epic clash with the Curiatii and the murder of their sister by Publius, the sole survivor of the battle, appear in the writings of Livy. 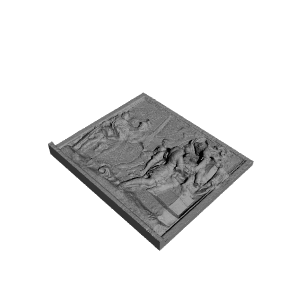