3D
360°
Scan The World
2,079 views 106 downloads
4 collections
Community Prints Add your picture
Be the first to share a picture of this printed object
0 comments

Cybele is an Anatolian mother goddess; she may have a possible forerunner in the earliest neolithic at Çatalhöyük, where statues of plump women, sometimes sitting, have been found in excavations. She is Phrygia's only known goddess, and was probably its national deity. Her Phrygian cult was adopted and adapted by Greek colonists of Asia Minor and spread to mainland Greece and its more distant western colonies around the 6th century BC.

Mehmet Aksoy (born 1939), the author of this piece, is a Turkish sculptor, called the "Anatolian Michelangelo". His sculptures often contain sensual figurative elements, but he is strongly rooted in a modernist sensibility with strong conceptual and abstract elements in his work. 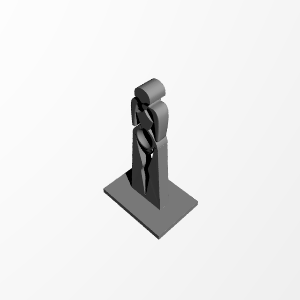 ×
4 collections where you can find Cybele by Scan The World