3D
Scan The World
4,346 views 201 downloads
Community Prints Add your picture
Be the first to share a picture of this printed object
0 comments

This was the first of Rodin's truncated, partial figures or 'fragments' to be shown as sculpture in its own right, rather than as an incomplete study. Inspired in part by damaged classical sculpture and incomplete work by Michelangelo, which he had studied in the Louvre and in Italy, these partial figures held great significance for the development of sculpture in the 20th century.

A small version of the figure was originally conceived for The Gates of Hell. The enlarged plaster version, exhibited as 'une figure' in the 1905 Salon, was probably the work of Rodin's trusted assistant Henri Le Bossé. This bronze is the only cast made in Rodin's lifetime. It was produced specially for an exhibition of contemporary French art at Grosvenor House in London in 1914 and called Cybele, after the ancient Greek goddess of the earth for this London showing.

The model was Adèle Abruzzesi, an Italian woman whom Rodin admired. His close associates called the figure and a related one Abruzzesi Seated and Abruzzesi Reclining. 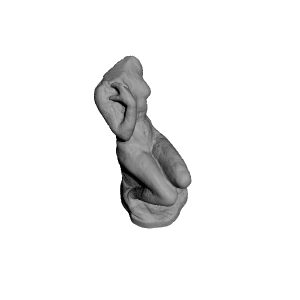 ×
0 collections where you can find Cybele by vam