Cylindrical base with dancers

3D
Scan The World
2,712 views 145 downloads
Community Prints Add your picture
Be the first to share a picture of this printed object
0 comments

Cylindrical base with dancers

This work is a Roman base, reworked in modern times and reused as a garden vase. The decoration is composed of winged female dancing figures separated by a vegetal motif formed by an intertwining of palmettes and acanthus ornaments.

The representation is inspired by Spartan dancers, the "saltantes Lacenae" cited by Pliny and derived from the model of the dancing figure codified by the sculptor Callimachus in the middle of the 5th century B.C. The innovation brought by the Greek artist to this imagery was to emphasise the delicacy of the dance by associating the movement of the dancer's body with the folds in her costume. Callimachus' model was frequently imitated during Neo-Atticism in the decoration of bases, reliefs and candelabras, while the vegetal elements recall Hellenistic art, especially toreutics, metalwork decoration.

In the 17th century, the work was restored, with the addition of ancient marble pieces among which we can make out a fragmentary inscription, later integrated with gesso in the upper part. 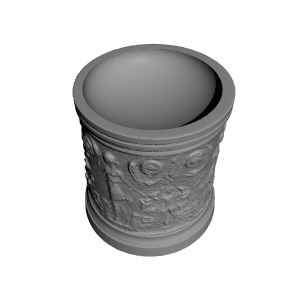