3D
Scan The World
2,344 views 128 downloads
1 collection
Community Prints Add your picture
Be the first to share a picture of this printed object
0 comments

This sculpture is an abstract execution of one of the well-known Greek myths describing the birth of Aphrodite. The goddess depicted with the shell behind her back, which is considered to be her symbol.

Aphrodite, the ancient Greek goddess of sexual love and beauty, identified with Venus by the Romans. The Greek word "aphros" means “foam,” and Hesiod relates in his Theogony that Aphrodite was born from the white foam produced by the severed genitals of Uranus (Heaven) after his son Cronus threw them into the sea. Aphrodite was, in fact, widely worshipped as a goddess of the sea and of seafaring; she was also honoured as a goddess of war, especially at Sparta, Thebes, Cyprus, and other places. However, she was known primarily as a goddess of love and fertility and even occasionally presided over marriage. 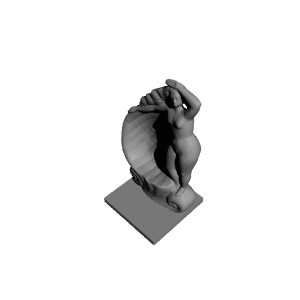