3D
Support Free Scan The World
4,703 views 294 downloads
3 collections
Community Prints Add your picture
Be the first to share a picture of this printed object
0 comments

The Dacian Wars (101–102, 105–106) were two military campaigns fought between the Roman Empire and Dacia during Roman Emperor Trajan's rule. The conflicts were triggered by the constant Dacian threat on the Danubian Roman Province of Moesia and also by the increasing need for resources of the economy of the Roman Empire.

Trajan turned his attention to Dacia, an area north of Macedon and Greece and east of the Danube that had been on the Roman agenda since before the days of Caesar when they defeated a Roman army at the Battle of Histria. In AD 85, the Dacians swarmed over the Danube and pillaged Moesia and initially defeated the army that Emperor Domitian sent against them, but the Romans were victorious in the Battle of Tapae in 88 and a truce was established.

Emperor Trajan recommenced hostilities against Dacia and, following an uncertain number of battles, defeated the Dacian King Decebalus in the Second Battle of Tapae in 101. With Trajan's troops pressing towards the Dacian capital Sarmizegetusa Regia, Decebalus once more sought terms. Decebalus rebuilt his power over the following years and attacked Roman garrisons again in 105. In response Trajan again marched into Dacia, besieging the Dacian capital in the Siege of Sarmizegetusa, and razing it. With Dacia quelled, Trajan subsequently invaded the Parthian empire to the east, his conquests expanding the Roman Empire to its greatest extent. Rome's borders in the east were indirectly governed through a system of client states for some time, leading to less direct campaigning than in the west in this period.

It is easy and support free model. Enjoy your print. 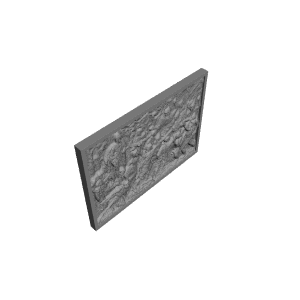 ×
3 collections where you can find Dacian War Bas-Relief in Deva, Romania by apllana