3D
360°
Scan The World
2,112 views 82 downloads
Community Prints Add your picture
Be the first to share a picture of this printed object
0 comments

Dame Margot Fonteyn (1919-91) was a British Ballerina. Born Margaret Hookham in Reigate, she attended the Vic-Wells Ballet School, and by the time she was twenty had danced the lead in three great classics: Giselle, Swan Lake and The Sleeping Beauty. She later joined Lilian Baylis's Sadler's Wells Company where she became emotionally involved with the composer Constant Lambert, brother of the sculptor of this portrait, who wrote Horoscope (1938) for her. She danced the lead in his Tiresias (1951). Fonteyn returned to the state from semi-retirement to dance with Rudolf Nureyev at his debut with the Royal Ballet, Covent Garden, in 1962, and together formed one of the greatest ballet partnerships of the twentieth century. 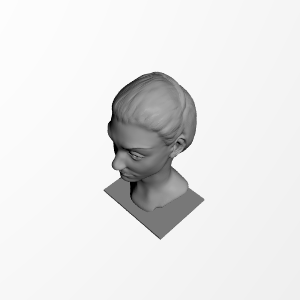