3D
Scan The World
1,409 views 63 downloads
Community Prints Add your picture
Be the first to share a picture of this printed object
0 comments

This is a copy of the Damoxenos sculpture from the Museo of Antonio Canova, the original is housed in the Octagonal Courtyard of the Vatican Museums.

Alongside the other statue, Creugas of Durres, and this work (Damoxenes of Syracuse) replays the narrative of two pugilists who met during the Nemean Games. According to legend, the two were so evenly matched that the competition lasted for hours without a decision. When there was no foreseeable end, both men agreed to take a single, undefended blow from the other. Creugas delivered the first punch, striking Damoxenos on the head. Damoxenos, struck Creugas on the side and tore out his intestines. The Argives disqualified Damoxenos, for killing his opponent and Creugas was posthumously declared the winner.

In 1795, Canova began working on the preparatory drawings of these subjects for sculptures. A year later, in 1796, both models were ready. The following year, Canova began the marble statue of Creugas, which was completed in 1801. In 1802, the two statues, along with the Perseus, were purchased by Pope Pius VII. Three years later, Canova developed a second model for the Damoxenos. 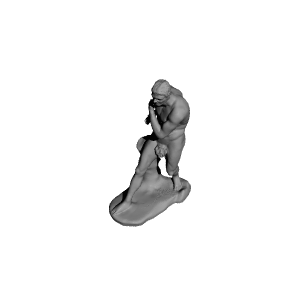 ×
0 collections where you can find Damoxenos by Scan The World