3D
Scan The World
2,055 views 132 downloads
1 collection
Community Prints Add your picture
Be the first to share a picture of this printed object
0 comments

Dance was one of Canova's favourite themes. He was fascinated by the sculptural effects of a figure in movement and many of his works, including reliefs and even paintings, deal with the subject of dance. He created three statues of dancers in various poses, the most successful of them that now in the Hermitage. The statue has had various names, and Canova himself called it "Erato, Muse of the Dance of Love" in one of his letters (he originally intended to add a figure of a faun playing a flute). Holding the edge of her long dress, the young woman moves slowly into her dance. The sense of rhythmic movement is so well expressed in the light turn of the torso, in the steps, the placing of the hands and the turn of the head, that the viewer immediately recognizes her as a dancer. Yet the strict, light line of the silhouette creates a sense of Classical balance which is evidence of the sculptor's unwavering loyalty to the ideal of Classical Antiquity. With great skill he conveys the fine transparency of the dancer's robe and the playful locks of hair crowned with a garland of flowers. Contemporaries were much taken with the innovative nature of the sculpture. Some scholars have even suggested that Canova's figures of dancers influenced 19th-century choreography. 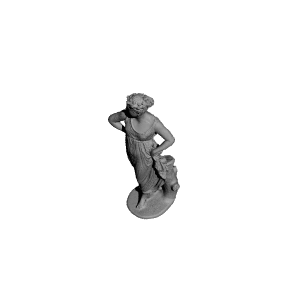 ×
1 collections where you can find Dancer at The State Hermitage Museum, St Petersburg by Scan The World