A ḍākinī is a type of spirit in Vajrayana Buddhism. The Sanskrit term is likely related to the term for drumming, while the Tibetan term means "sky goer" and may have originated in the Sanskrit khecara, a term from the Cakrasaṃvara Tantra. Dakinis are often represented as consorts in Yab-Yum representations. The masculine form of the word is ḍāka, which is usually translated into Tibetan as pawo "hero" (Wylie: dpa' bo).

The dakini (and the daka) appeared in medieval legends in North India (such as in the Bhagavata Purana, Brahma Purana, Markandeya Puranaand Kathasaritsagara) as a demon in the train of Kali who feeds on human flesh. They are comparable to malevolent or vengeful female spirits, deities, imps or fairies in other cultures, such as the Persian peri.

As a key tantric figure, the dakini does appear in Tangmi; the dakini figure disseminated into Japanese culture from Shingon Buddhism, evolving into the dakini-ten ("ten" means "deva" in Japanese), becoming linked to thekitsune iconography.

The dakini appears in a Vajrayana formulation of the Three Jewels' Buddhist refuge formula, known as the Three Roots. Most commonly she appears as the dharmapala, alongside a guru andyidam.

The dakini, in her various guises, serves as each of the Three Roots. She may be a human guru, avajra master who transmits the Vajrayana teachings to her disciples and joins them in samayacommitments. The wisdom dakini may be a yidam, a meditational deity; female deity yogas such asVajrayogini are common in Tibetan Buddhism. Or she may be a protector; the wisdom dakinis have special power and responsibility to protect the integrity of oral transmissions"

The archetypal dakini in Tibetan Buddhism is Yeshe Tsogyal, consort of Padmasambhava. 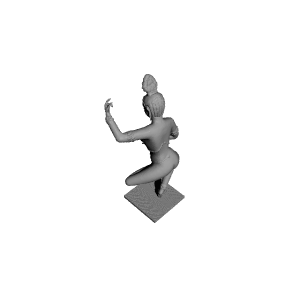 ×
3 collections where you can find Dancing Dakini at The Guimet Museum, Paris by Scan The World
×
Louise Krasniewicz
@LouiseK
0
Printed on: MakerBot Replicator 2
Material: PLA
Posted at: 02nd October 2022