3D
Scan The World
2,521 views 185 downloads
Community Prints Add your picture
Be the first to share a picture of this printed object
0 comments

This satyr is a Roman replica from a group of the 2nd century AD probably in bronze, today lost, only known thanks to a series of Cyzique (Turkish) coins and a series of other copies. The satyr is presented entertaining a nymph who sits facing him. The comparison with the first copies allows for us to understand the exact pose of the arms, restored in this version. The satyr dances through playing an instrument called a 'kropezion' (a sort of castagnette) which he holds in both hands. 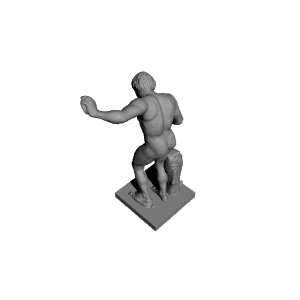