Dante at The Petit Palais, Paris

3D
Scan The World
3,087 views 129 downloads
Community Prints Add your picture
Be the first to share a picture of this printed object
0 comments

Dante at The Petit Palais, Paris

This plaster sculpture, finished in 1879 is the production of Jean-Paul Aubé (1837-1916) and is a model of an original bronze sculpture in the Place Marcelin-Berthelot in Paris. The plaster model, exposed in the Salon in 1879, was bought by Paris to be cast in bronze. It was exposed at the opening of the Petit Palais in 1902 in the sculpture gallery. The Divine Comedy b Dante (Florence, 1265 - Ravenne, 1321) marks the stat of the romantic generation, in particular Delacroix. The sculpture fascninated sculptirs of the XIX Centutry such as Carpeaux (Ugolin), then Rodin who was a friend of Aubé (The Gates of Hell at the Musée Rodin). Jean-Paul Augé represented the poets of hell which repelled bad forces. The catalogue of the Salon of 1879 cites the verses of the Divine Comedy, "I know not, but as through the heads I went, My foot struct hard a face among the same. "Why tramplest on me? If thou art not bend," He weeping said, "revenge to aggravate for Montaperti, why dost me torment?" 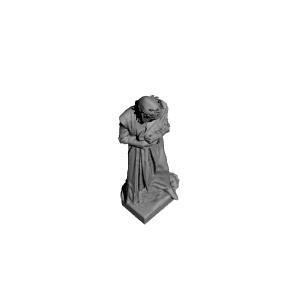 ×
0 collections where you can find Dante at The Petit Palais, Paris by Scan The World