3D
Scan The World
2,374 views 161 downloads
2 collections
Community Prints Add your picture
Be the first to share a picture of this printed object
0 comments

Daphne  is a minor figure in Greek mythology known as a naiad—a type of female nymph associated with fountains, wells, springs, streams, brooks and other bodies of freshwater. There are several versions of the myth, but the general narrative is that because of her beauty, Daphne attracted the attention and ardor of the god Apollo (Phoebus). Apollo pursued her and just before being overtaken, Daphne pleaded to her father, the rivergod Ladon, and Ge (Gaia) for help. So Ladon then transformed Daphne into a laurel tree. In Metamorphoses by Roman poet Ovid, she is identified as the daughter of the rivergod Pineios in Thessaly. At the Pythian Games which were held every four years in Delphi in honour of Apollo, a wreath of laurel gathered from the Vale of Tempe in Thessaly was given as a prize. According to Pausanias the reason for this was "simply and solely because the prevailing tradition has it that Apollo fell in love with the daughter of Ladon (Daphne)". 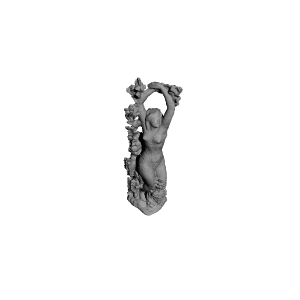