Daphnis and Chloe at The Louvre, Paris

3D
Scan The World
4,679 views 425 downloads
1 collection
Community Prints Add your picture
Be the first to share a picture of this printed object
0 comments

Daphnis and Chloe at The Louvre, Paris

Daphnis and Chloe is the only known work of the 2nd century AD Greek novelist and romancer Longus.

Daphnis and Chloe is the story of a boy (Daphnis) and a girl (Chloe), each of whom is exposed at birth along with some identifying tokens. A goatherd named Lamon discovers Daphnis, and a shepherd called Dryas finds Chloe. Each decides to raise the child he finds as his own. Daphnis and Chloe grow up together, herding the flocks for their foster parents. They fall in love but, being naive, do not understand what is happening to them. Philetas, a wise old cowherd, explains to them what love is and tells them that the only cure is kissing They do this. Eventually, Lycaenion, a woman from the city, educates Daphnis in love-making. Daphnis, however, decides not to test his newly acquired skill on Chloe, because Lycaenion tells Daphnis that Chloe "will scream and cry and lie bleeding heavily [as if murdered]." Throughout the book, Chloe is courted by suitors, two of whom (Dorcon and Lampis) attempt with varying degrees of success to abduct her. She is also carried off by raiders from a nearby city and saved by the intervention of the god Pan. Meanwhile, Daphnis falls into a pit, gets beaten up, is abducted by pirates, and is very nearly raped. In the end, Daphnis and Chloe are recognized by their birth parents, get married, and live out their lives in the country.

This marble sculpture, finished and displayed in the Salon in 1827 (with a plaster model presented prior in 1824) was sculpted by Jean-Pierre Cortot (Paris, 1787 - Paris, 1843). Cortot chose to represent the moment where Daphnis took to play a flageolet (a flute) to Chloe. 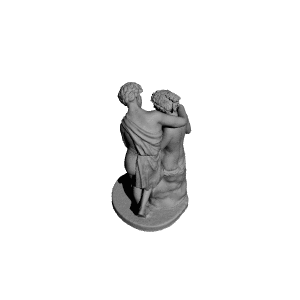 ×
1 collections where you can find Daphnis and Chloe at The Louvre, Paris by Scan The World