3D
Featured Scan The World
6,431 views 775 downloads
6 collections
Community Prints Add your picture
Be the first to share a picture of this printed object
0 comments

The speculated titles are so named as there is no true consesus on whom it is supposed to depict. In 1530, at the same time as this work, Michelangelo started a small marble of David, though it is believe that he abandonded this work and attempted to adapt it to a classical depiction of Apollo, though it was inevitably left unfinished.

The serpentine pose (similar to the contrapposto, see Laocoon and his Sons for reference) of the nude figure has brought many to belive that the right arm is resting a sling over his back, such as in Michelangelo's David. A 1553 inventory of Cosimo I's art collection even describes it as "an incomplete David by Buonarroti". 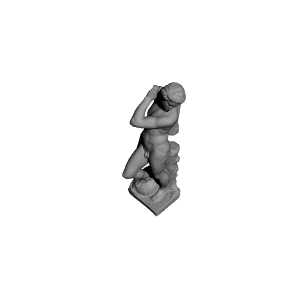