Donatello's David With the Head of Goliath

Donatello's David With the Head of Goliath

David (With the Head of Goliath) is the title of two sculptures of the biblical hero David by the Italian Renaissance sculptor Donatello, both are housed in the Museo Nazionale del Bargello in Florence.

This bronze David is ultimately famous for being the first unsupported standing work of bronze cast during the Renaissance, and the first freestanding nude male sculpture made since antiquity.

The work depicts David with an enigmatic smile, posed with his foot on Goliath's severed head just after degeating the giant. The yotuh is completely naked, apart from a laurel-topped hat and boots, bearing the sword of Goliath. Before this work, David was typically depicted as a king, given his status in the Old Testament. Here, however we are shown a youth, almost feminine in its features. It is suggested that this is because David overcame the giant Goliath not by physical prowess, but through God - however this is still speculation. The boy's nudity further implies the idea of the presence of God, contrasting the youth with the heavily-armoured giant.

Most scholars believe that the sculpture was commissioned by Cosimo de' Medici, who had a particularly high opinion of Donatello, but exactly when it was made is not known. In any event, by the time of the wedding of Lorenze the Magnificent in 1469, the bronze stood in the centre of the courtyard of the Medici palace in Florence. Following the seizure of the Medici palace in 1495, and the expulsion of the Medici family from the city in 1496, the David was placed in the courtyard of the Palazzo della Signoria, where it was installed on a marble column.  It was seen here during the mid-16th century by the Mannerist biographer Giorgio Vasari (1511-74) who wrote: "This figure is so natural in its vivacity and softness that artists find it hardly possible to believe it was not moulded on the living form." 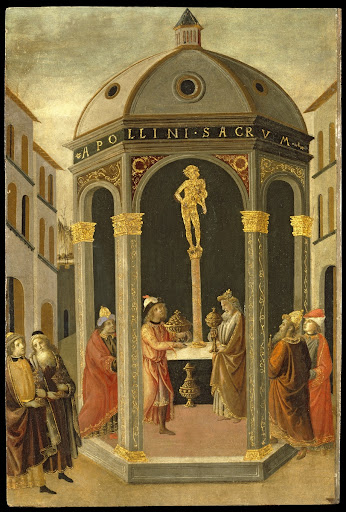 Master of the Marradi, The Treasure of the Temple at Jerusalem Brought by Nebuchadnezzar to the House of God, c. 1490.

During the 17th century it was removed to the Pitti Palace, probably due to its sudden controversy sparked by Francesco Filarete,

" The David of the court is an imperfect figure, because from behind his leg is silly."

This controversy stems from the overall nudity of the statue that fuels the interpretative transformation of this patent sensuality into sexuality. Unlike the common public representations of men (such as other Davids and Hercules), this bronze presents an ambivalent conception of gender. What is more, in response to Filarete's statement, is that of the feather which crawls up the inner thigh of the boy. This could mean many things, including the idea that Donatello was refering to homosocial values in Florentine society. The feather also led many scholars to believe that the sculpture was actually intended to depict Hermes. 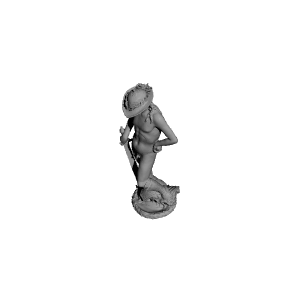 ×
3 collections where you can find Donatello's David With the Head of Goliath by SMK - Statens Museum for Kunst
×
Tyler Public Library
@TylerPublicLibrary
1
Printed on: Other
Material: ABS
Posted at: 29th September 2020

We printed this on the Library's PolyPrinter 229.