3D
10,385 views 879 downloads
6 collections
Community Prints Add your picture
Be the first to share a picture of this printed object
1 comments

This death head cane is perfect for any of your costumes. The skull and top hat design will add a sophisticated twist to this spooky character. Add 1" dowel and a rubber crutch tip and you are ready to go for steam punk night.Steampunk is a sub-genre of science fiction that typically features steam-powered machinery,especially in a setting inspired by industrialized Western civilization during the 19th century. Steampunk works are often set in an alternative history of the 19th century's British Victorian era or American "Wild West", in a post-apocalyptic future during which steam power has regained mainstream use, or in a fantasy world that similarly employs steam power.

This model was finished with a layer of PVA glue and black glitter. 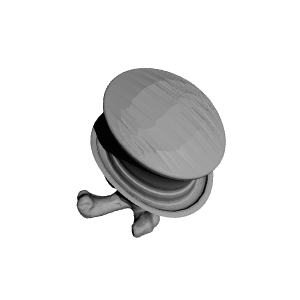 ×
6 collections where you can find death head cane by alanstanford