3D
360°
1,378 views 111 downloads
6 collections
Community Prints Add your picture
Be the first to share a picture of this printed object
0 comments

Stories of Vishnu’s incarnations have been narrated again and again through the mouth of
grandmothers, dialogues of long sitcoms and sequence of sculptures in shrines found today inside
ruined shrines. The decorative corner found from such ruin in Puraneshwar, Gujarat, possibly narrates
one of these tales where an avatar of Vishnu is slaying a demon. The sequence of the fight between the
avatar and demon is presented inside three large rectangular frames. The consistent sequence is either
depiction of Lord Vishnu’s third avatar Varaha killing the demon Hiranyaksha or eighth avatar Krishna’s
combat with horse-like demon Keshi. As for the smaller linear frames, they connect the continuous
sequence to the background narrative with statue assembly of saints and resting figure of Vishnu
suggesting the found sculpture could be narrating the story of Vishnu. 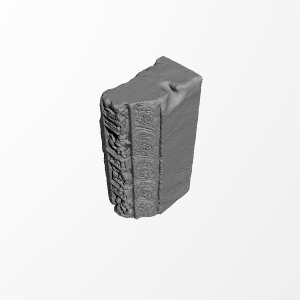