Demure No. 4 at The Middelheim Museum, Antwerp

3D
Scan The World
2,582 views 79 downloads
Community Prints Add your picture
Be the first to share a picture of this printed object
0 comments

Demure No. 4 at The Middelheim Museum, Antwerp

Born Henri Étienne-Martin 4 February 1913 in France. He attended the Ecole des Beaux Arts de Lyon from 1929 to 1933, where he met Marcel Michaud. He moved to Paris in 1934, working at the studio of Charles Malfray at the Académie Ranson where he came into contact with such painters as Roger Bissière, Jean Le Moal, Jean Bertholle, Alfred Manessier, Zelman, Véra Pagava, and the sculptor François Stahly. With them, he became part of the group Témoignage, which had exhibitions in Paris in 1938 and 1939. He worked primarily in wood and plaster, creating works inspired by his childhood memories of his home in Loriol. Later sculpture included bronze, string, and textiles.

During World War II Étienne Martin was a prisoner in Germany and was liberated in 1941. In 1942 he traveled to Oppède with Stahly et Zelman and then in 1943-1944 he went to Dieulefit, Drôme where he met the writer Henri-Pierre Roché. Next he moved to Mortagne-au-Perche, Normandy. On his return to Paris in 1947 he lived with Roché, and he met Brâncuși and Gurdjieff. Over the next dozen years he became spiritual, practicing Eastern religions including Taoism.

In 1954 Martin began his series of Demeures for which he became well known. He received in 1966 the grand prize for sculpture in the 33rd Venice Biennale. He was a professor and head of the sculpture department from 1968 to 1983 at the École nationale supérieure des Beaux-Arts in Paris. He was elected 1971 to the Académie des beaux-arts. 1984 he took part of an exhibition bringing together all his Demeures was held at the Pompidou Center in Paris. In 2010, June to September, a new exhibition at the Pompidou Center, paid respect to the artist by showing fifteen sculptures, drawing, personal notebooks, and photographs of his studio.  He died in 1995 from cardiac arrest. 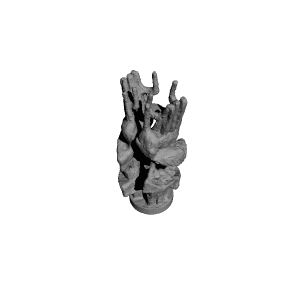 ×
0 collections where you can find Demure No. 4 at The Middelheim Museum, Antwerp by Scan The World