3D
Scan The World
9,964 views 150 downloads
Community Prints Add your picture
Be the first to share a picture of this printed object
0 comments

Valentin Petrovich Glushko (born 2 September 1908 – 10 January 1989), was a Soviet engineer, and the principal Soviet designer of rocket engines during the Soviet/American Space Race.

At the age of fourteen he became interested in aeronautics after reading novels by Jules Verne. He is known to have written a letter to Konstantin Tsiolkovsky in 1923. He studied at an Odessa trade school, where he learned to be a sheet metal worker. After graduation he apprenticed at a hydraulics fitting plant. He was first trained as a fitter, then moved to lathe operator.

During his time in Odessa, Glushko performed experiments with explosives. These were recovered from unexploded artillery shells that had been left behind by the White Guards during their retreat. From 1924-25 he wrote articles concerning the exploration of the Moon, as well as the use of Tsiolkovsky's proposed engines for space flight.

He attended Leningrad State University where he studied physics and mathematics, but found the specialty programs were not to his interest. He reportedly left without graduating in April, 1929. From 1929-1930 he pursued rocket research at the Gas Dynamics Laboratory. A new research section was apparently set up for the study of liquid-propellant and electric engines. He became a member of the GIRD (Group for the study of Rocket Propulsion Systems), founded in Leningrad in 1931.

On 23 March 1938 he became caught up in Joseph Stalin's Great Terror and was rounded up by the NKVD, to be placed in the Butyrka prison. By 15 August 1939 he was sentenced to eight years in the Gulag. Despite his supposed imprisonment, however, Glushko was put to work on various aircraft projects with other arrested scientists. In 1941 he was placed in charge of a design bureau for liquid-fueled rocket engines. He was finally released in 1944 by special decree. In 1944, Sergei Korolyov and Glushko designed the RD-1 KhZ auxiliary rocket motor tested in a fast-climb Lavochkin La-7R for protection of the capital from high-altitude Luftwaffe attacks.

At the end of World War II, Glushko was sent to Germany and Eastern Europe to study the German rocket program. In 1946, he became the chief designer of his own bureau, the OKB 456, and remained at this position until 1974. This bureau would play a prominent role in the development of rocket engines within the Soviet Union.

In 1974, following the successful American moon landings, premier Leonid Brezhnev decided to cancel the troubled Soviet program to send a man to the Moon. He consolidated the Soviet space program, moving Vasily Mishin's OKB-1 (Korolev's former design bureau), as well as other bureaus, into a single bureau headed by Glushko, later named NPO Energia. Glushko's first act, after firing Mishin altogether, was to cancel the N-1 rocket, a program he had long criticized, despite the fact that one of the reasons for its difficulties was his own refusal to design the high power engines Korolev needed because of friction between the two men and ostensibly a disagreement over the use of cryogenic or hypergolic fuel.

In 1965, after the UR-500 booster began flying, the Chelomei Bureau offered a counterproposal to Korolev's N-1 in the UR-700, a Saturn V-class booster with nine F-1 sized engines powered by N2O2/UDMH. Korolev was an outspoken opponent of hypergolic propellants due to their toxicity, often citing the 1960 Nedelin catastrophe as evidence of the danger posed by them, and had also objected to the UR-500 for the same reason.

Glushko meanwhile was an advocate of Chelomei's UR-700 as well as an even more powerful UR-900 with a nuclear-powered upper stage. When Korolev continued protesting about the safety risk posed by hypergolic propellants, Glushko responded with the counterargument that the US was launching the manned Gemini spacecraft atop a Titan II rocket with very similar propellants and it was not apparently a safety issue for them. He also argued that the N-1 was not a workable solution because they could not develop RP-1/LOX engines on the scale of the Saturn F-1. When Korolev also suggested developing a liquid hydrogen engine for the N-1, Glushko said that LH2 was completely impractical as a rocket fuel. Korolev's protests that the US was already using them on the Centaur stage and would soon be flying Saturn boosters with LH2 upper stages got nowhere.

The UR-700, Glushko said, could enable a direct-ascent trajectory to the Moon which he considered safer and more reliable than the rendezvous-and-dock approach used by the Apollo program and Korolev's N-1 proposals. He also imagined the UR-700 and 900 in all sorts of applications from lunar bases to manned Mars missions to outer planet probes to orbiting battle stations.

When Korolev died in January 1966, his notoriously incompetent deputy Vasily Mishin took over his design bureau. Mishin succeeded in getting the Kremlin to terminate the UR-700/900 project as well as the RD-270 engine Glushko planned for the launch vehicle family. His main arguments were the tremendous safety risk posed by a low-altitude launch failure of the UR-700 in addition to the waste of money by developing two HLV families at once.

After the complete failure of the Soviet manned lunar effort, unmanned Mars missions, and the deaths of four cosmonauts, Mishin was fired in 1973 and the Kremlin decided to consolidate the entire Soviet space program into one organization headed by Glushko.

One of Glushko's first acts was to suspend the N-1 program, which however was not formally terminated until 1976. He then began work on a completely new HLV. During this time, the US was developing the Space Shuttle and Soviet premier Leonid Brezhnev had been told that the Shuttle was actually being constructed as an orbiting weapon system that could drop a nuclear bomb onto Moscow, bypassing all Soviet detection systems. Although the rumor was completely false, Brezhnev believed it anyway and ordered the development of a Soviet Space Shuttle.

Because the Soviets lacked expertise in large solid rocket motors, Glushko decided that the new HLV would use entirely liquid-fueled engines, with an LH2 core stage taking the place of the Shuttle main engines and strap-on boosters with LOX/RP-1 engines, an ironic situation given his opposition to those propellants years earlier.

While the RD-120 engine used for the Energia core stage was developed quickly and with little difficulty, the RD-170 proved harder to work out. As Soviet manufacturing technology was still not up to the task of building an F-1 class engine, Glushko instead decided to use an engine with four combustion chambers fed off a single propellant feed line. The RD-170 became the basis for the Zenit booster family which began flying in 1985, and because the Buran space shuttle was not ready to go yet, Energia's maiden flight in May 1987 carried aloft a prototype space station module called Polyus. Ultimately, Buran did fly the following summer and a few months before Glushko's death.

While Energia and Buran fell victim to loss of funding after the collapse of the USSR, the RD-170 engines are still flying today and the experience in LH2 engines made during the Energia project would be used in later upper stages such as Briz.

Glushko's team was part of the Soviet General Machine-Building empire headed by Minister Sergey Afanasyev. Before his death, he appointed Boris Gubanov to become his successor.

Glusho died in January 1989. His obituary was signed by multiple Communist Party of the Soviet Union leaders, including Mikhail Gorbachev and it was only following his death that Glushko's efforts became known to most of the Soviet populace.

For many years Glushko had worked in Korolev's shadow, and certainly never received the credit he deserved (at the time) for his contributions. His personality was reputed to be bull-headed, and he never lacked for an ego.

Perhaps his most significant engineering failure, as noted by division chief Yuri Demyanko, was his insistence that hydrogen was unsuitable for use as a rocket fuel. As a result, the Soviet space program was still discussing the use of hydrogen-fueled engines while the Americans were assembling the Saturn V launcher. Also, Glushko's design bureau consistently failed at building a rocket engine powered by LOX/Kerosene with a large combustion chamber to rival the American F1 used on the Saturn V; instead, his solution was the RD-270, a single large combustion-chamber engine powered by hypergolic fuels which had almost the same thrust and better specific impulse as compared to the US F-1 rocket engine in addition to using the very advanced full-flow staged combustion concept as opposed to the simple gas generator cycle used by the F-1 rocket engine. This was a primary reason for the failure of the N1, which was forced to rely on a multitude of smaller engines for propulsion because Sergei Korolev, its chief designer, insisted on using the LOX/Kerosene combination, which Glushko felt would take much more time and money to design. Glushko never did overcome the combustion instability problems of large rocket motors using kerosene propellants; his eventual solution for this is seen on the RD-170 which is basically four smaller combustion chamber/nozzle assemblies sharing common fuel delivery systems. This solution and engine gave the Soviets the large thrust propulsion needed to build the Energia superbooster, and is probably the finest technical example of Glushko's abilities when he was at his best. The fact that he never developed this solution until the firing of Vasily Mishin and his gaining ultimate control of the entire Soviet space program is a testament to the paralyzing intrigue and in-fighting that went on within the Soviet effort to reach the Moon. 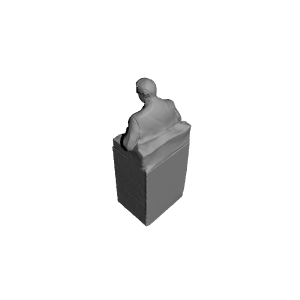