3D
Scan The World
3,430 views 421 downloads
2 collections
Community Prints Add your picture
Be the first to share a picture of this printed object
0 comments

The sculpture belongs to a group of works created specifically for new pantheons built during the early 1900s. Artists created sculptures of angels or Virtues that included consoling women overcome by the weight of their grief and allegorical figures reflecting sublime thoughts and feelings relating to death such as despair, grief, or resignation. In short, they modeled desolate, meditative, and mysterious women with no regard to their beauty. The characteristics these works had to have in order to illustrate the general spiritual state led artists to adopt languid, bowed female figures with long hair dressed in tunics that sprang straight from the skin. Although this style wasn't adopted in all the works, female figures predominate and their formal characteristics passed into the artistic language used by modernist sculptors in the works they produced for collectors, without those elements more suited to funerary images associated with death.

Desolation is full of feeling, an aspect in the Symbolist vein. The most notable characteristic of the work is the ease with which it transmits inner emotions. The Hermeticism and mysterious nature the sculpture evokes have to do with its posture. The hidden gaze, the closed composition of the body, and its curved contours seem to enclose the figure within its own silence. 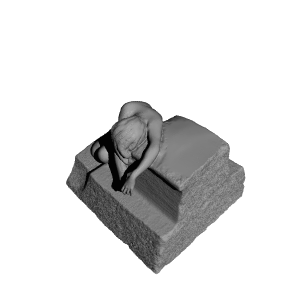 ×
2 collections where you can find Desolation by Scan The World