Diana at The Louvre, Paris

3D
Scan The World
4,936 views 451 downloads
1 collection
Community Prints Add your picture
Be the first to share a picture of this printed object
0 comments

Diana at The Louvre, Paris

In Roman mythology, Diana was the goddess of thehunt, the moon and childbirth, being associated with wild animals and woodland, and having the power to talk to and control animals. She was equated with the Greek goddess Artemis, though she had an independent origin in Italy. Diana was worshipped in ancient Roman religion and is revered in Roman Neopaganism and Stregheria. Dianic Wicca, a largely feminist form of the practice, is named for her. Diana was known to be the virgin goddess of childbirth and women. She was one of the three maiden goddesses, Diana, Minerva and Vesta, who swore never to marry.

Oak groves were especially sacred to her. According to mythology (in common with the Greek religion and their deity Artemis), Diana was born with her twin brother Apollo on the island of Delos, daughter of Jupiter and Latona. Diana made up a triad with two other Roman deities: Egeria the water nymph, her servant and assistant midwife; and Virbius, the woodland god.

This sculpture was executed by Alselme Flamen between 1693-1694. It is the first piece of work commissioned for the Parc de Marly which it was placed first of all. it is now on permanent display at The Louvre in paris. 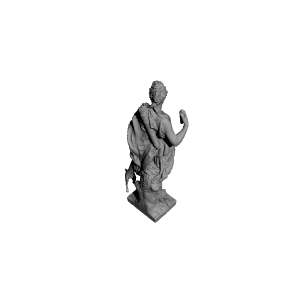 ×
1 collections where you can find Diana at The Louvre, Paris by Scan The World