3D
Scan The World
3,325 views 174 downloads
1 collection
Community Prints Add your picture
Be the first to share a picture of this printed object
0 comments

This marble statue of Diana the Huntress was intended for the sculpture gallery at the 2nd Marquess of Rockingham's country seat, Wentworth Woodhouse, in Yorkshire, but seems not to have been taken there until after his death in 1782 and was never actually displayed. Diana is shown in the act of shooting her bow. Her dramatic pose, running forward and twisting her head round to take aim, is actually derived from an early 17th-century bronze statuette of Cupid, of which Nollekens made four drawings.

Joseph Nollekens was one of the most successful sculptors in England in the late 18th and early 19th centuries, particularly of portrait busts and church monuments. This figure is unusual in being an ideal work intended for a sculpture gallery, a new type of setting for sculpture in England, probably partly inspired by the displays of antique marbles in Rome. Nollekens had spent the 1760s in Rome, where he had not only studied ancient sculpture but had also built up his own reputation as an artist, acquiring a number of English patrons, such as Charles Townley and Lord Yarborough. On his return to England he became the leading sculptor in London, and was quickly overwhelmed with commissions. One of his former studio assistants, J. T. Smith, was to write a vituperative biography of the sculptor after his death, in which he condemned him as a miser, ridiculing his odd personal habits and the squalor in which he lived. However, he admitted that Nollekens worked exceptionally hard, and that his portrait busts in particular were unrivalled. 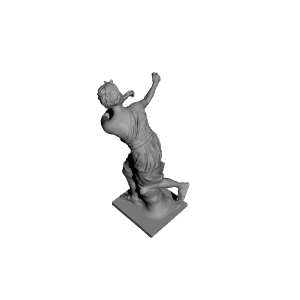 ×
1 collections where you can find Diana by vam