3D
Scan The World
1,468 views 61 downloads
Community Prints Add your picture
Be the first to share a picture of this printed object
0 comments

A legendary Greek hero, son of Tydeus and Deipyle. He was the favourite of Athena and was under her protection. Diomedes participated in the expedition of the Epigone against Thebes. Later he succeeded his grandfather Adrastus as the king of Argos and joined the Greeks against Troy. On the Greek side, the two greatest champions were Ajax and Diomedes. They fought gloriously and many a Trojan fell before their weapons. Diomedes nearly slew Prince Aeneas. Aeneas was of royal blood, and the goddess Aphrodite hastened to the battlefield to save him. She lifted him in her arms, but Diomedes leapt towards her and wounded her hand. Crying out she let Aeneas fall and weeping for the pain she made her way to the Olympus. Although Aphrodite failed to save her son, Aeneas did not die that day. Apollo enveloped him in a cloud and carried him to sacred Pergamos, the holy place of Troy, where Artemis healed him of his wound. 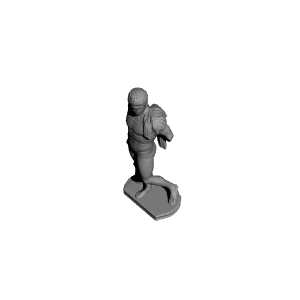 ×
0 collections where you can find Diomedes by Scan The World