3D
360°
Featured Scan The World
3,307 views 393 downloads
6 collections
Community Prints Add your picture
Be the first to share a picture of this printed object
0 comments

This plaster cast was transferred from the Academy of Fine Arts in 1897. The work was made after a Roman sculpture, found in Emperor Hadrian's Villa in Tivoli in 1881, known as the Dionysus of Tivoli.

The original white marble (housed at the Palazzo Massimo alle Terme) is a classicizing work of the 2nd Century AD, heavily inspired by the works of the 4th Century BC.

The Panther (in mythology) was a large creature in ancient legend that was one of the favoured mounts of the god Dionysus. 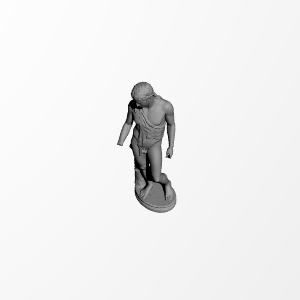