3D
Scan The World
3,679 views 363 downloads
1 collection
Community Prints Add your picture
Be the first to share a picture of this printed object
0 comments

On December 26th 1829, Mathieu Kessels was admitted to the Accademia nazionale di San Luca as an academic resident. On November 5th 1830 he donated this plaster work, Discobolo at Rest. The sculptor dedicated himself several times on this issue, when, already in the year after his arrival in Rome in 1819, after his stay in Paris and Russian, he began working in the studio of Thorvaldsen, where he became a pupil. Dell'opera, which shows clear references to classical art and Hellenistic, are preserved in various European museums various replicas, partial reproductions and variants. The existence of numerous versions on the theme of discus thrower , is confirmed from the inventory of the works in his studio in Piazza dei Cappuccini 83 drawn up to his death, in which they appear numerous plaster casts of Discobolo place in various acts, as well as a marble head " derived from discobolo lying ". 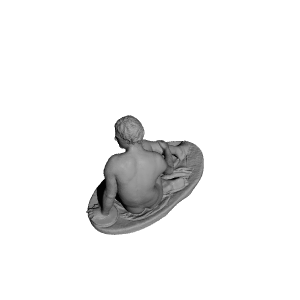