3D
Featured Scan The World
4,009 views 255 downloads
Community Prints Add your picture
Be the first to share a picture of this printed object
0 comments

This fragmentary sculpture is a copy from the Roman period of one of the most well-known statues in the history of Greek art: the Discobolus, meaning the disk thrower.

The original Greek bronze sculpture was designed in the fifth century BCE by one of the greatest sculptures of all times: Myron.

The most complete Roman marble replica comes from Esquiline Hill in Rome and belonged to the Lacelotti family.
The Musée Saint-Raymond’s marble was discovered before the Lancelotti’s Discobolus, near Caracassone, in the Aude’s riverbed. The work was misinterpreted and was even exhibited seated. Today, it is the only copy of the Discobolus excavated in Western Europe outside of Italy.

The representations of disk throwers on sculptures, vases, and coins provide an understanding of this sport from the Greek epic. The moment chosen by Myron shows the final stage of the swing: the arm lifted high in the back while the left leg prepares to return in front to counterbalance the body’s disequilibrium caused by the throwing. The muscular tension in the abdomen and thighs is remarkable and shows that the Greeks researched the translation of movement well. 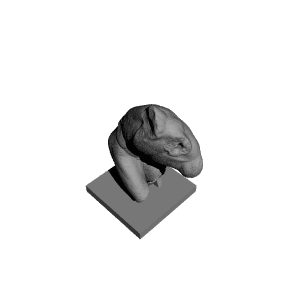