3D
Scan The World
3,417 views 234 downloads
2 collections
Community Prints Add your picture
Be the first to share a picture of this printed object
0 comments

The Capitoline 'Antinous' is a marble statue of a young nude male found at Hadrian's Villa, Tivoli, during the time when Conte Giuseppe Fede was undertaking the earliest concerted excavations there. In the 18th century it was considered to be one of the most beautiful Roman copies of a Greek statue in the world. It was then thought to represent Hadrian's lover Antinous owing to its fleshy face and physique and downturned look. In part due to its hair being unlike that in better-attested Antinous-types, which closely follow a very few iconographic models, it is now considered to be a Roman Imperial era copy of an early 4th century BC Greek statue of Hermes.

This copy is a lead statue displayed outside of the Wilkins Building, at the heart of the UCL Bloomsbury campus’ main quad (London, England). 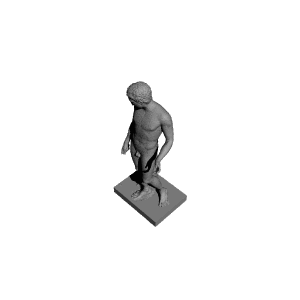