Discus Thrower at The Fine Arts Museum of Brussels, Belgium

3D
Scan The World
4,619 views 303 downloads
3 collections
Community Prints Add your picture
Be the first to share a picture of this printed object
1 comments

Discus Thrower at The Fine Arts Museum of Brussels, Belgium

This Sculptue is The Discus Thrower peparing to throw, completly naked. Captured in a moment, an instant, were the aim is to replicate to perfection of his muscles and the proportion and symmetria of his body.

Mathieu Kessels (also known as Matthias or Matthijs) was born the son of a carpenter in Maastricht. One of his brother became an architect, another brother a famous clock maker, both of them in Hamburg. Mathieu was first apprenticed to a goldsmith in Venlo but soon gave up his apprenticeship to attend the École des Beaux-Arts in Paris. In 1806 he made his way, via Hamburg, to Saint Petersburg where he abode eight years, learning how to make wax models and sculptures of various kinds in the workshop of Joseph Camberlain. In 1815 he returned briefly to Venlo and Maastricht. He then spent several months atGirodet's studio in Paris, where his work was exhibited at the 1819 Salon. Being determined to go to Rome, he was accepted as an apprentice of theDanish sculptor Bertel Thorvaldsen, probably in 1818. In a competition for young artists, organized by Venetian sculptor Antonio Canova, Kessels in 1819 won the highest award with his terracotta Saint Sebastian pierced by arrows, a piece of frank and beautiful workmanship. In Rome he became a member, later professor of the Academy of St. Luke and of the Institute of the Netherlands. He also was a member of the academies in Amsterdam (from 1824 onwards) and Antwerp. In Rome Kessels taught the Liege sculptors Louis Jehotte (c. 1803-84) andEugene Simonis, who exerted an influence through their teaching at theAcadémie Royale des Beaux-Arts in Brussels. Another student of Kessels was the Dutch sculptor Johannes Antonius van der Ven, who sculpted his funeral stone. Mattieu Kessels died in Rome while he was working on Saint Michael overcoming the Hydra of Anarchy for the church of Saint Gudula, now Brussels cathedral. On Kessels's death his studio, having been inventoried by Thorvaldsen, was acquired by the Belgian government and transferred to the Royal Museums of Fine Arts of Belgium, Brussels. The museum now owns over 70 works by Kessels. Four plaster sculptures are permanently exhibited in the museum's neoclassical department: Discobole lançant le disque (1822–23), Génie funèbre éteignant un flambeau (c. 1829), Monument funeraire de la comtesse (1830–32) and Scène du déluge  (c. 1836).

Among his numerous classically minded patrons was William Cavendish, 6th Duke of Devonshire, who commissioned two marble bas-reliefs, Day and Night (1819), and Diskobolos Preparing to Throw (1828), both in Chatsworth House. A bronze copy of his Diskobolos stands in the gardens of the Palais des Académies in Brussels. Another bronze copy is in theRijksmuseum in Amsterdam. For Carlos Miguel Fitz-James Stuart, 14th Duke of Alba Kessels sculpted Reclining disk thrower, now in the Accademia Nazionale di San Luca in Rome, and Cupid whetting his darts. In 1823 Ludwig I, the crown prince of Bavaria, visited him in his studio in Rome and ordered a marble bust of Admiral Tromp, which in 1845 was placed in the Walhalla memorial in Donaustauf, near Regensburg. Ludwig offered Kessels a position as director of the academy in Munich but Kessels remained in Rome. Another important patron was William I, King of the Netherlands for whom he sculpted Mars resting, a colossal marble now at the palace of Laeken, for which Kessels received the Order of the Netherlands Lion.

In our days, Kessels is no longer regarded as a major artist but in his lifetime he was famous. As he belonged to the Roman school of neoclassical sculpture, founded by Canova and Thorvaldsen, along with Johann Gottfried Schadow, Albert Wolff and others, he adhered to idealist aesthetics and to the laws prescribed by classical art. His pure neoclassical works, apart from some of the works mentioned above, include the marble busts of Marcus Aurelius, Cicero, Isis, and Gaius or Lucius Caesar (all 1817-19), The genius of Art (1820–23), Bacchus (1823–24), Woman weeping over an urn (1825) and Venus (1826–29). In the late 1820s Kessels renounced some of the pure classicism of Thorvaldsen in favour of the more seductive style of Canova, mixed with the pathos of Italian Baroque. This is the case with his marble monument to the Countess of Celles (Rome, Chiesa di San Giuliano dei Fiamminghi, 1828). In another large sculpture, Flood Scene (plaster, c. 1833), the romantic emphasis of this work differentiates it from some of the other works of his late period, which are imbued with religious sentimentality, such as a sculpture of Christ at the Column, a bas relief of the head of Christ, a Pietà, and busts of Christ, the Virgin Mary and the four evangelists.

Printed in FormFutura EasyFil White @ 215, heated bed @ 65, Med quality, 15% infill, standard support and raft settings. You may need to add more support to his front leg to stop it collapsing. 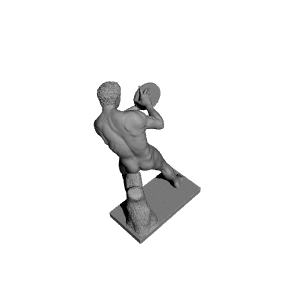 ×
3 collections where you can find Discus Thrower at The Fine Arts Museum of Brussels, Belgium by Scan The World