3D
Scan The World
5,660 views 301 downloads
4 collections
Community Prints Add your picture
Be the first to share a picture of this printed object
0 comments

Found in 1970 during excavations of a Roman district of Fréjus (Le Clos de la Tour, Insula I), near a large building with peristyle and exedras, this marble duo-bust is a suprising exception to the relatively abundant and usually mediocre series of Hellenistic and Roman depictions of Double-Hermes sculptures. The artist skillfully combined, between them, two rural divinities crowned with flowers. On the one hand a young Fauna characterized by attributes and goats whose features without excessive accuse the sports temperament and mischievous spirit, the other a bearded Hermes or Dionysus, imbued with an Olympian majesty, whose look "unfathomable "is highlighted by an archaic kouros smile purpose. One can recognize in this group both severe and playful Hermes-Pan dyad, country gods confused in Latin countries with Terminus and Faunus, poorly distinguished, moreover, Priade and Sylvain. The Homeric Hymn to Pan (XVII) and Herodotus (II, 145-146) Goat make-up a son of Hermes. This close relationship and very similar pastoral functions have favored the meeting on one of the two main pillars Arcadian gods.

However, the frequent confusion since the Antiquity between closely related types of Dionysus and Hermes, the assimilation of the theme, widespread, assessor of the Satyr Bacchus, some may leave some doubt. It lacks only Dionysus, for preferring to Hermes, the ivy wreath that usually distinguishes the gods in the procession with a long beard. Anyway, Latin taste for "Janus", a happy archaic mode, and recovery of festivals crossroads (compitales) by Augustus, endorse pretty much the choice of the association and the beautiful style of this sculpture . Imported in Fréjus, Forum Julii, one of the doors of the Gauls, by way of settlement, this work of art could decorate the garden of a rich villa urbana, unless it belonged to a public building , palaestra or market. Heiress, in many ways, the purest Hellenic tradition, it lacks in truth a Greek signature.

The sculpture has no signature and the sculptor is unknown but is believed to have been created in the style of Augustus. 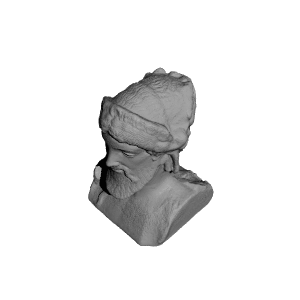 ×
4 collections where you can find Double Head of Hermes at The Réunion des Musées Nationaux, Paris by RMN