Double Herm of Sokrates and Seneca

3D
Scan The World
2,516 views 91 downloads
Community Prints Add your picture
Be the first to share a picture of this printed object
0 comments

Double Herm of Sokrates and Seneca

The Double Herm of Socrates and Seneca is an ancient Roman statue from the first half of the third century AD. The herm depicts the Greek philosopher Socrates on one side, and the Roman Stoic Seneca the Younger on the other. The combination of the two philosophers here owed something to the personal inclinations of the person who commissioned it, even if it is not clear why these two philosophers were linked in particular. Probably it has to do with the fact that they were both forced to commit suicide. The presentation of philosophers (and poets) as double herms was the most common use of this genre.

It currently belongs to the Antikensammlung Berlin, which lent it to the Neues Museum. 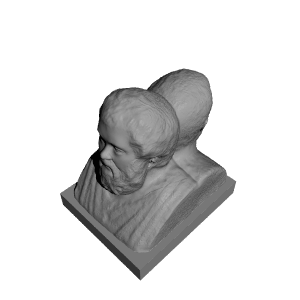