Double statue of the princesses Luise and Friederike of Prussia

3D
Scan The World
3,141 views 270 downloads
3 collections
Community Prints Add your picture
Be the first to share a picture of this printed object
0 comments

Double statue of the princesses Luise and Friederike of Prussia

The double statue of Crown Princess Luise and Princess Friederike of Prussia marks a highpoint in European Classicism. For the first time, two female figures were portrayed life-size as a double statue, that is to say, individuals were being depicted who had no claims on posterity by virtue of their achievements as rulers or as military figures. Luise looks into the distance with patient resolve, viewing her future duties as queen. Friederike leans against her older sister’s side. Dreamingly thoughtful yet coquettish, she takes her sister’s hand resting on her shoulders in a gently sensitive gesture. The closeness of the two sisters and the contrast of their characters and destinies resonate equally in this graceful work. 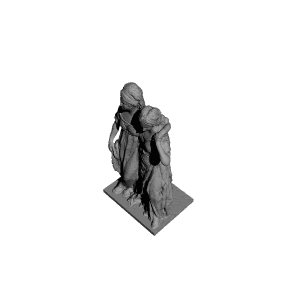