This ancient Chinese dragon knocker looks scary, doesn’t it? A long-rooted tradition in China is to respect creatures that are either benevolent or intimidating. The dragon knocker definitely falls into the latter. Traditional knockers do not necessarily have practical use. Rather, their symbolizing significance matters.

Knockers are one of the most representative objects of the strict hierarchy of imperialist ancient China. They are divided in terms of the creature featured on a knocker, the material used and the sophistication of the sculpture. This is a replica of a Chinese dragon knocker to the gate to the most important worship temple, The Temple of Heaven, located in central Beijing, originally built in Ming Dynasty (AD 1420) by the emperor. It is made of bronze and coated with gold, and the complicate details of the sculpture shows that the temple is in the possession of the emperor, the only person in this country to be entitled for the most sophisticated work on their properties.

Now comes the most important question: what does it mean to have an intimidating dragon knocker? The Chinese dragon has been considered as the most powerful creature, and thus symbolizes the power and authority of the emperor. At the same time, Chinese have the tradition of “warding off evil spirits”. “Evil spirits” have been deemed as some force that would keep people away from wealth and fortunes. As to the royal family, “evil spirits” might even shake their power and control over the country, and the Chinese dragon has been believed to be able to defeat such evil forces. Hence, with this underlying meaning, the Chinese dragon knockers have played very critical roles in representing both “power” and “the protection of power”, and have done their duty to “keep evil spirits outside of the door”. 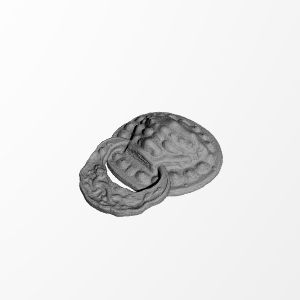 ×
8 collections where you can find Dragon Knocker by STW-China
×
Philippe Barreaud
@philippeb66
2
Printed on: Sindoh 3DWOX 1
Material: PLA
Posted at: 29th May 2022