This dragon head is used as a decoration for the base of a gate pillar in the Chapultepec park in Mexico City. With round, blunt teeth and stylised features, it does not come across as a scary dragon, yet was probably intended to serve as a guardian and is impressive in size - approximately 150x100 cm.

Chapultepec, more commonly called the "Bosque de Chapultepec", is one of the largest city parks in the Western Hemisphere. The area was inhabited by Aztec rulers and had a castle built in the colonial period as well. It now functions as oxygen "lungs" for Mexico City. The name Chapultepec stems from the Nahuatl word chapoltepēc which means "at the grasshopper's hill". 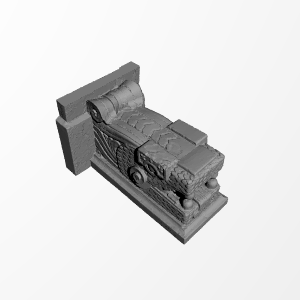 ×
18 collections where you can find Dragon pillar foot by Scan The World
×
left spin
@leftspin
1
Printed on: Prusa i3 MK3
Material: PLA
Posted at: 27th September 2022

The dragon head joined to a lego like brick.