3D
Scan The World
3,803 views 506 downloads
3 collections
Community Prints Add your picture
Be the first to share a picture of this printed object
0 comments

This famous sculpture of Henry Moore is composed of swelling masses, where the reclining mother tenderly cradles her small child. Drapery largely conceals the massive figure's anatomy, but a clearly delineated arm forms a protective right angle around the stiff, inert baby. The mother's eyes, the only feature of her otherwise blank face, stare unblinkingly outward at the viewer. A rich, golden surface, punctuated by bright highlights and dark caverns, enhances the sculpture's warm, protective quality. The horizontal form's hollows and curves, tarnished and hatched to emphasize depth, partly transform the figure into a glimmering, rolling landscape.

This work combines several themes that preoccupied Henry Moore: the reclining figure, the relationship of mother and child, and the landscape. Moore began exploring the reclining figure motif in a series of drawings he made in the late 1920s--nearly sixty years before creating this sculpture. Despite his continued interest in this subject, the sculptor resisted attaching any specific or symbolic meaning to it. Instead, he insisted that the reclining figure was simply a formal vessel--a pose he understood and greatly appreciated-- that allowed him to explore questions of form. 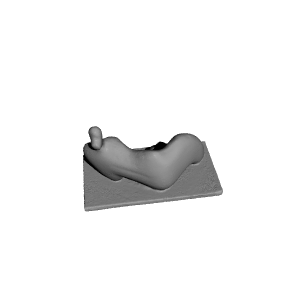