Draped Woman at The Louvre, Paris

3D
Scan The World
2,794 views 216 downloads
Community Prints Add your picture
Be the first to share a picture of this printed object
0 comments

Draped Woman at The Louvre, Paris

At the end of the XVIII Century, the figurative statue was on display in the large room of the villa Borghese, Rome, forming a pair with another statue of a similar style (MR 68, also on Scan the World) which can be found in the same room, the Apollo Gallery, at The Louvre. The antique body is an Roman adaption of the sculpture 'The Little Herculanaise' (find it here on Scan the World), a piece from the end of the IV Century BC, attributed to Praxiteles. The head and the flute she holds in her left hand which transforms the statue into a muse are modern adaptions. The two statues are a mixture of old fragments of statues.

The model prints outs very nicely but needs supports and additional finishing to remove the supports. You might also want to scale it up for better detail in the hands & fingers. 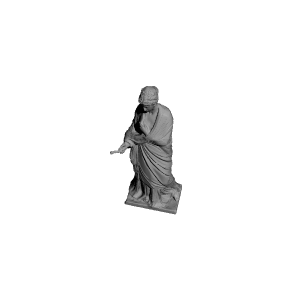 ×
0 collections where you can find Draped Woman at The Louvre, Paris by Scan The World