Dvarapala at the Guimet Museum, Paris

3D
Scan The World
4,146 views 260 downloads
1 collection
Community Prints Add your picture
Be the first to share a picture of this printed object
0 comments

Dvarapala at the Guimet Museum, Paris

Dvarapala (Sanskrit) is a door or gate guardian often portrayed as warrior or fearsome asura giant, usually armed with a weapon, the most common is gadha mace. The statue of dvarapala is a widespread architectural element throughout the Hindu and Buddhist cultures, as well as in the areas influenced by them like Java.

The related name in Bahasa Malaysia and Bahasa Indonesia is dwarapala. Equivalent door guardians in northern Asian languages are Kongōrikishi or Niō in Japanese, Heng Ha Er Jiang in Chinese, and Narayeongeumgang in Korean.

These statues were traditionally placed outside Hindu or Buddhist temples, as well as other structures like royal palaces, to protect the holy places inside. A dvarapala is usually portrayed as an armed fearsome guardian looking like a demon, but at the gates of Buddhist temples in Sri Lanka, dvarapalas often display average human features. In other instances a fierce-looking nāga snake figure may perform the same function.Dvarapalas as an architectural feature have their origin intutelary deities, like Yaksha and warrior figures, such as Acala, of the local popular religion. Today some dvarapalas are even figures of policemen or soldiers standing guard.

The sculptures in Java and Bali, usually carved from andesit estone, portray the dvarapala as fearsome danavas or daitya(asura race) with a rather bulky physique in semi kneeling position and holding a club. The largest dvarapala stone statue in Java, a dvarapala of the Singhasari period, is 3.7 meters tall. The traditional dvarapalas of Cambodia and Thailand, on the other hand, are leaner and portrayed in a standing position holding the club downward in the center.

The ancient sculpture of dvarapala in Thailand is made of a high-fired stoneware clay covered with a pale, almost milky celadon glaze. Ceramic sculptures of this type were produced in Thailand, during the Sukhothai and Ayutthaya periods, between the 14th and 16th centuries, at several kiln complexes located in northern Thailand.

Depending on the size and wealth of the temple, the guardians could be placed singly, in pairs or in larger groups. Smaller structures may have had only one dvarapala. Often there was a pair placed on either side of the threshold to the shrine. Some larger sites may have had four (lokapālas, guardians of the four cardinal directions), eight, or 12. In some cases only the fierce face or head of the guardian is represented, a figure very common in the kratonsin Java. 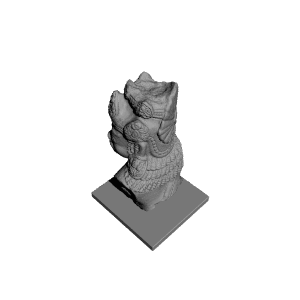 ×
1 collections where you can find Dvarapala at the Guimet Museum, Paris by Scan The World