Adonis, with an injury to his left thigh, lies naked on the ground as he dies. The young deified hero, the object of a contest between Aphrodite and Persephone, dies of the injusry provoked by a wild bore (featured below the man's leg), whose likeness was perhaps assumed to be the jealous Ares himself (Aphrodite's lover). Adonis was originally the Babylonian god Tammuz; his Greek name derives from the Phoenician appellative Adon, "Lord".

The Dying Adonis was a popular subject in neoclassical sculpture. This work is a copy of the original housed in the Museo del Bargello in Florence. It was originally sculpted by Vincenzo de' Rossi in ca. 1560, in the height of the Renaissance. De' Rossi was a pupil of Michelangelo, and this work echoes a style similar to his allegories of night and day (on the tomb of Lorenzo in the Medici Chapel). 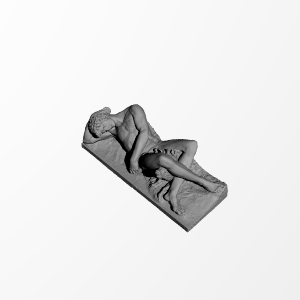 I thought gold might look better, but I'm not so sure now.