3D
Scan The World
2,261 views 130 downloads
1 collection
Community Prints Add your picture
Be the first to share a picture of this printed object
0 comments

The Dying Gaul is a marble sculpture from a Roman group of works known as The "Lesser Attalid Dedication", attributed to the School of Pergamene Baroque. Each sculpture follows a style of early antiquity, famed in the Hellenistic era, where sculptors developed an empathetic genre of 'victim art', the style focusing on suppleness in pose, flowing drapery and hyper-realistic explicit poses.

Each of the sculptures in the group resembles various throes of death. The "Dying Gaul" for example gathers himself in his final moments, whilst his pierced side oozes sculpted blood. The other sculptures of the group, including an Amazon and Giant lie dead and prone, agony still quiverying in their marble flesh. The bodies were presented scattered across the floor as if on the field of battle. They radiate an extraordinary loveliness in suffering, demanding their enemies' pity and admiration.

The original sculptures from the dedication are now destroyed, so only Roman copies of the bronze originals that once adorned Athens survive. The group was made to commemorate victory over the Gauls, installed on the Acropolis around 200 BC by Attalus I, King of Pergamon. The group originally consisted of around 20 statues, though no copies of the victors (Pergemenes, Greeks, Dionysus) have survived. 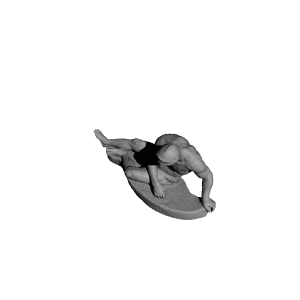