3D
Scan The World
4,560 views 136 downloads
Community Prints Add your picture
Be the first to share a picture of this printed object
0 comments

The statue represents a young woman who, wounded to death by an arrow, falls to her knees striving to extract it. In her we can recognize one of the daughters of Niobe, the mythical queen who, mother to seven sons and seven daughters, dared boast of being more prolific than Leto and for this reason was punished by Apollo and Artemis with the murder of her children.

According to a recent and evocative hypothesis (by E. La Rocca), the statue, a Greek original dateable between 440 and 430 BCE, was part of the pedimental group of the Temple of Apollo Daphnephoros at Eretria.

It was transferred to Rome in the Augustan Age by the Roman general Gaius Sosius, who had it placed as a decoration in one of the sides of the pediment of the Temple of Apollo built at his own expense in the Circus Flaminius.

The myth of the Niobids was, in fact, extremely suitable for emphasizing the affinity between Apollo, the avenger God, and the emperor Augustus, avenger of his adoptive father, Julius Caesar, as well as protector of Gaius Sosius. The statue would be successively moved to theHorti Sallustiani (Gardens of Sallust), perhaps as a component of an open air ornamental complex. 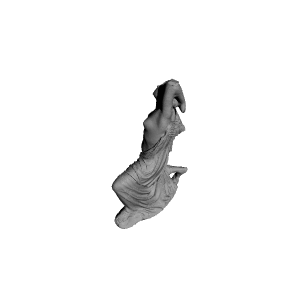 ×
0 collections where you can find Dying Niobid at The Royal Cast Collection, Copenhagen by geoffrey.marchal